My first experience at INSA started with exiting the metro and trying to find my way to school. I was nervous as it was my first day at this new school, and felt anxious about arriving late to this new school. When I got out of the metro, I asked a local to point me towards Carrer del Torrent de l’Olla (which I said with a horrible American accent) and once I was given the direction, I was on my way. After a short walk down the street, I was easily able to locate the school.

Once I had made it to INSA, I stood out front with a couple other students whom I didn’t know would end up being my classmates, and began the usual small talk that we all hate (Wow! It’s hot in Barcelona at this time of year! Where are you from? Oh great!.. I’ve always wanted to visit there…). After a couple minutes of this torturous small talk, Jose from the administration department came outside to greet us and informed us which classroom we’d have our orientation. When everybody had arrived, we sat anxiously while waiting for our names to be called (and mispronounced). Once called, we had to give a brief description about ourselves and then walk up to the front of the room to collect our INSA folders, notebooks and USB’s.

Then, the ice-breaking began.

We were randomly sorted into groups of three or four and began working on the Marshmallow Challenge. Quickly, everybody’s nervousness and anxiety started to fade as we needed to work together to achieve a common goal; making a dry spaghetti tower as tall as possible, with a marshmallow on top. My group ended up making a disastrous abomination that looked like a crane that tipped over, but we were able to begin to feel more comfortable with one another. After we had measured everyone’s towers, we moved on to our next icebreaker, but not before I ate the marshmallow from each group’s tower.

Our next task was to play a game of “Wolf”, otherwise known as “Mafia”. Oriol Vila, the professor of our Acting and Communication course quickly explained the rules and then shredded a sheet of paper, placing different roles on each one. As he’d walk around, we would pull a piece of paper out of his hand and that would be our role for the game. The game was a great icebreaker because we quickly got more comfortable joking with each other while simultaneously having to analyze each other’s body language to try to figure out who the wolves were. It was the perfect combination of hilarious and serious. By the end of the game, nobody was inhibited by their nervousness, which was previously obvious when we all first met.

After the icebreaking exercises and being given more general info about the school, we all went up to the rooftop patio and had some soft drinks and snacks while being able to meet other students and teachers. Most of our class ended up staying for about an hour and a half to two hours because we were really enjoying getting to meet one another. At the end, when everybody was starting to leave, the class made a Whatsapp group to make it easy to communicate amongst each other, be it for classwork or any sort of discussion.

It was a really great first day that helped us get over our anxiety’s and be able to feel truly comfortable with each other and with the staff at school. 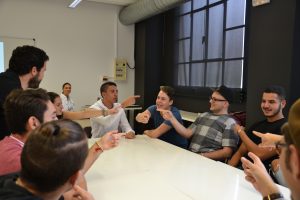 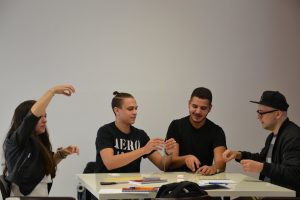 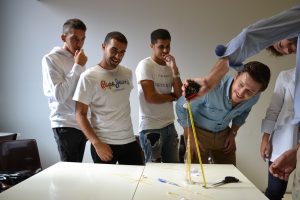 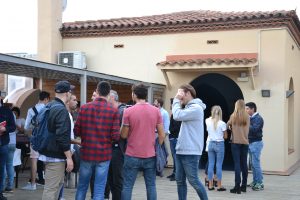